To start out our 4th of July celebrations, I ran the Butte to Butte race in Eugene, OR with 9 other friends. 7 people ran the 10k (the main race of the day) and 3 of us ran the 5k. Apparently, this was the first year that the 5k was all on the road. The 10k has a pretty large hill for most of mile 1, then returns downhill during mile 2, and is mostly flat for the remainder of the race. It is a point-to-point race. The 5k started and finished at the 10k finish line, and was a nice flat out and back course.

The 5k started at 7:45am. It actually started a minute or two early, which I couldn’t believe!! The race directors were calling some of the speedy runners over to get started on time. Haha. Because of timing with parking and taking a wrong turn getting to the start line, I barely had enough time to use the bathroom, and definitely didn’t get in much of a warmup before the race started. The beginning of the race was slightly down hill. I want sure what my pace was going to be. Lately my first mile or so is slower as I feel like it takes by body a little longer to warm up. I had enough time to do a few dynamic stretches and a super short jog, so I was hoping that would be enough. I also have been Just generally running a bit slower.

Race adrenaline and weaving through some people, plus the slight downhill got me going quick though. Maybe a little too quick. Near the end of mile 1, I got a small cramp so I walked for a minute to let my muscles relax. I finished mile 1 in 8:55. Once I picked it back up, I kept the pace a little more conservative. We ran around a small block for our turn around and headed back toward the finish line. Mile 2 was a 9:05. I was feeling good and moving along well, then I realized there was a train going by ahead and a lot of runners were getting backed up there. I ended up getting stopped by the train for a little over a minute at 2.6 miles into the race. Afterward we found out that the train affected some people’s times by over 6 minutes! After the train went by, I just ran it in trying to keep it feeling pretty easy. My unofficial finish time, excluding the train stop was 28:15. 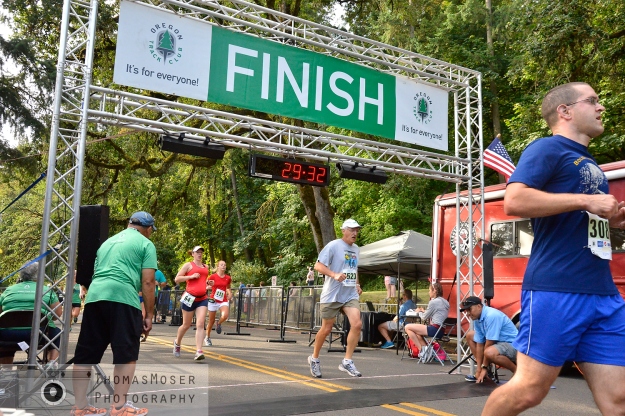 I had a super nice comment from someone after I finished the race. Me and another woman were in the finisher shoot. She stopped me and said “you were pacing me for a while and I was behind you thinking ‘wow, I want to look like her, she must do crossfit.’ And it want until just a minute ago I realized that you are pregnant!” She continued to tell me how impressed she was. This woman totally made my day!!!

After I finished, I cheered on other runners finishing the 10k, and enjoyed the beautiful day with friends. It was awesome to have a big crew racing together. The rest of the day was full of lounging, trying to stay cool on a hot day, lunch at a  brew pub (root beer float for me!), and attempted viewing of fireworks. 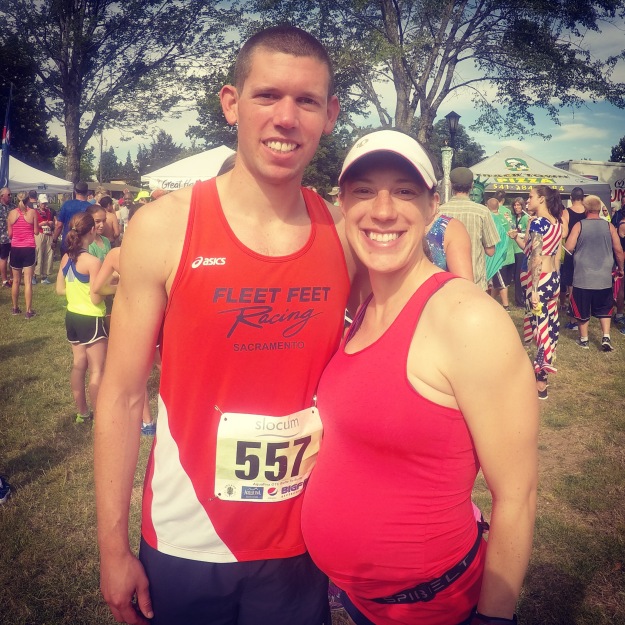 Did you run a race on July 4th?