On Sunday, I officially finished my second marathon at the Outer Banks Marathon in North Carolina!

Race morning was great. We got dropped off at the start about 50 minutes early. With less than 1200 marathon finishers, the start area was small, and easy. We got in the bathroom line right away, and only waited a few minutes afterward before getting into the corrals. It just seemed like a nice hometown race.

I was nervous I was going to be cold for the first few miles, but I actually warmed up pretty quickly. The first few miles of the race were on a heavily tree lined street. Many of the local families were out cheering us on. I loved it. You know how sometimes people talk about getting emotional at the end of the race? Yeah — I got emotional at mile 3 when there was perfect temperatures, sun streaming through the trees, and a guy had some great music playing on the side of the road. It was amazing.

I felt awesome for the first 9 miles. Running felt easy. I was flying. I decided not stress about looking at my watch, and just go by feel. I made a quick pit stop around mile 6. We went through a split timer at the 10k mark. Based on my watch, my pace for the first 10k was about an 8:50/mi average. Looking back, this is a little faster than I probably should have started….but like I said, I was feeling so good! I loved this first part of the race. there were so many people out cheering…especially around the Wright Brothers Memorial. 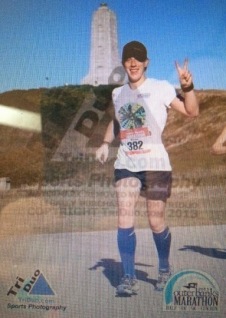 {running around the memorial}

Around mile 10, we headed onto the trails (like I mentioned in my pre-race post). The first 2 miles of this were on hard packed dirt with rocks. I was nervous about rolling my ankle. The terrain was also rolling hills. My pace slowed, but I kind of expected that to happen during this portion. I tried to keep up my pace as much as possible though.

At about mile 12, we transitioned to single track trail. The ground was softer in this area, with some of it being a bit sandy. I had never really run much trail before. I loved how quiet it made everyone’s footsteps. Even though it was difficult, I still kind of loved it. I think I might have to try doing more trail running! (Side note, I read a few recaps before the race that said there was a non-official aid station here that handed out amazing banana bread. I had to get some. It was true. So delicious!)

Finally, right at the half way mark, we were out of the trail. As soon as I was back on the road, I realized how much trying to keep up my pace in the woods had tired me out. I crossed the half way point at 1:58. I was able to pick my pace back up to right around a 9 min/mile for a few more miles, but then things started to break down. 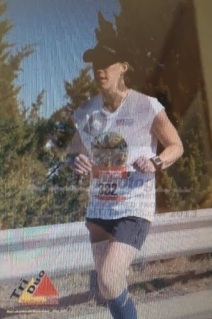 Around mile 16, my stomach was starting to feel off. I was feeling hungry, but the bloks I was eating were not sitting well, making me feel nauseated. At mile 18, I felt a little dizzy, and knew I needed some more calories. I forced myself to eat some more, and that helped. I think the other thing that started to affect me during this time was the heat. The day was actually a great temperature, but the second half the course provided no shade at all. On a day with full sun and 18 miles into the race, I was getting pretty hot!

I started taking some walk breaks at mile 18, but I was able to keep my pace up to 10 min/mile for a couple miles. I tried to keep the walking to a minimum. I started taking extra water at the aid stations to dump over my head.

At mile 21, the course turned into a 20 mph headwind. At this point most of my remaining energy really started to get sapped. I again stopped looking at my watch, knowing my initial goals were out of reach. My new goals were 1) enjoy the rest of the race as much as I could, and 2) to finish ahead of my time from my previous marathon. There was a bridge to go up for about half a mile from 22.5-23. I just kept plugging along with a mostly run, some walk ratio. I honestly don’t remember too much about this part of the race…I just tried to keep putting up as much effort as I could and keep my heart in it.

{love the run…even when its difficult. Great idea, Coeur!}

Just before mile 25 I took my last walk break. When I started walking, another runner came up behind me and convinced me to start running with her. We only chatted for a few minutes before she needed to take another break, but she helped get me motivated to keep going to the finish line. I was able to keep running until finally crossing the line with an official time of 4:14:46.

As you can see, this race didn’t quite go as planned for me, particularly in the second half — not sure if it was that I didn’t eat enough, that I started too fast, or just that it wasn’t my day. However, I’m still so proud of my accomplishment of finishing those 26.2 miles. Plus, I had a huge improvement over my first marathon with a 17 minute PR! Just like I said when I finished my first marathon, I am so proud and excited to have finished a marathon — something I definitely never thought I would be capable of doing. Any day that I can finish a marathon is amazing. 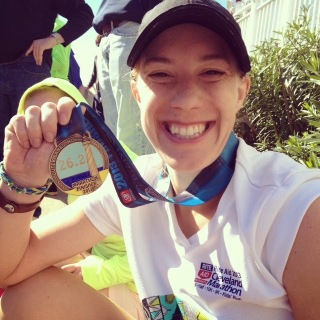 Leave a Reply to Holly @ Run With Holly Cancel reply

Doing our best to enjoy and make the most of our vacation before heading back to the real world and the craziness that’s happening right now. Can you tell how much fun I had riding my bike yesterday? 🚲 🌴 🌊 Thankful for a week with family and sunshine ☀️ . . . . . #hawaii #bigisland #bikeworkshop #rideyourbike #ironmantri #triathlete #triathlon #wyninthewild #jjm #vantagepoint
Enjoying some sunshine and running along the Queen K. 🌴 🍍 . . . . . #vacation #runbig #hawaii #motherrunner #triathlete #triathlon #queenk #coeursports #hokaoneone
As the spring weather starts to roll around it makes me so glad to have the flexibility for lunch runs. 🏃‍♀️ This week was finally shorts weather! Plus some sunshine ☀️ and movement (even 20-30 mins!) during my day helps break up the full day of focus and sitting at my desk. 👩‍💻 I’ve been posting a lot about getting out in the sunshine lately - I guess I’m glad spring is on its way, and it’s way more exciting than my morning trainer rides in the dark. 🤣 How do you get up and moving during your work day? . . . . #motherrunner #getoutside #runcorvallis #coeursports #hokaoneone #garminfenix5 #runner #triathlete #triathlontraining
Starting to feel like spring is in the air! Days are getting longer, temperature is warming up and the sun is coming out! ☀️ I sometimes really appreciate the efficiency of the trainer and riding inside, but I think I was smiling the whole ride on Saturday getting to ride outside in the sunshine. I think the sun provides a few free watts. 🚲😉 📷: @pure_endurance . . . . #triathlontraining #triathlon #rideyourbike #getoutside #cycling #swimbikerun #bikecorvallis #ironman #triathlete #pureendurance