Week 9 was about getting back into the routine after Hood to Coast (see my recaps Pt I & Pt II), and a little rest/recovery. I ended up taking some extra rest time for some fun events later in the week, so I missed a workout Thursday, but I know I will be back at it this week.

Monday: return from HTC. 45 mins of yoga for recovery

Tuesday: easy 4 miles. Legs were still feeling sore and sluggish. I didn’t want to push it too much. But it felt good to get my legs moving.

Wednesday: P90x legs
I also noticed some knee pain, but didn’t feel it while lifting. I decided maybe more recovery was still needed post HTC. Not used to so many hard runs in a row, maybe?

Thursday: rest
Knee still acting up, so more rest. I wanted to make sure I could do my weekend long run on Saturday!
I also went out to a concert — Casey Abrams who was in American Idol season 10. He was a little quirky as usual, but it was fun and a small venue.

Saturday: 16 mile long run.
I feel like 16 milers officially mean marathon training. I know that probably some people train to 16 for half marathons or other shorter races, but I never have. So now that I’ve hit 16, I think I feel like I’m finally into marathon zone! YES!

This run went ok. I actually did a good job of keeping my pace consistent throughout the run. The biggest slow downs were a few water breaks. My calves were getting really tight in the last two miles, and I was just ready to be done. No issues with my knee though — thank goodness for rest days! My calves were tight for most of the rest of the day too, so I did some legs up the wall and compression socks for recovery. Time to re-focus on calf stretching!!!

I think what really got me through the end of this run though was thinking of these awesome teammates! #virtualpowerarch to the rescue! 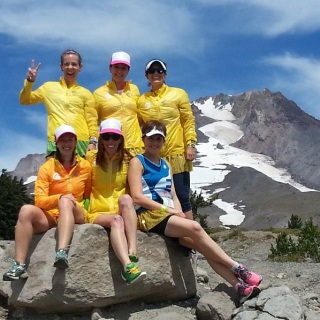 Sunday: rest
We wanted to make the most of the long weekend, so Ryan, a couple friends and I went wine tasting for the day. We have all been working hard lately so it was good to take a break.

What do you like to do on your rest days?