Saturday morning I completed the Tri for Fun sprint triathlon. Yep, this is the same one I did back in early June! TBF Racing hosts 3 of the same tri over the course of the summer. The great thing about it is that you know how you are improving because it is the same route. One thing I do wish this race had is timing for each sport rather than just overall time. It would be nice to have official times for swim, bike, run and transitions.

Because of my calf strain earlier in the week, my plan for this race was to simply go out and have fun. I have been working on my swimming — trying to feel more comfortable in the water. I told myself that if I got to the run, and my calf hurt I was ok with walking to the finish. Being uninjured is more important than running in this one race.

I am always a little intimidated by the swim start. I am usually a middle of the pack swimmer. The water was really warm, so I did not wear my wet suit. I started out right with the group, but got a little nervous about running into people, so I think I slowed down a bit. My first buoy turn was a little wide, so I think I ended up swimming a little extra. In general, I felt pretty good throughout the swim, and seemed to keep my heart rate under control. I am slowly feeling more confident in the water. 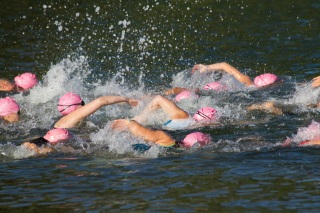 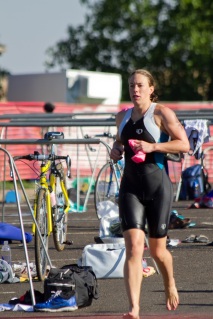 In my August race, I used my garmin during the bike and run in the multi sport mode. This was really nice, and I was planning to do that again. During T1, however, I forgot to put on the watch. I didn’t realize until I was about a half mile into the bike. Oops! Guess I was going to be biking by feel. I told myself to let my heart rate settle, but get into a comfortably hard pace. Hold it there until the turn around, then hammer it back to transition.

On the bike I passed a few women right away. I wanted to start picking people off. When I approached the turn around, I counted the number of women ahead of me. There were 12. By the time I finished the bike, there were 9. I knew that two were super speedy women from the swim wave after me, and at least one was only 14! The wind was a little against us on the way back. Throughout the bike I ate 3 Clif Bloks, and drank about half my water bottle. I felt good and strong throughout the bike.

When I got back to transition for the bike, I decided not to run with my garmin either. I didn’t want to push myself to injury for a certain pace. Going by feel again. My calf felt fairly good…it was little tight at times, but no real pain, so I ran the whole way. I drank a cup or two of water during the run. One woman who I passed during the bike passed me on the run, but she was not in my age group. Otherwise I held my position.

I enjoyed not knowing my pace at the time to keep me from stressing over it. Now I wish I knew what I ran though! Haha.

These are some of the most intense race photos I think I have ever taken! The one on the left with the men chasing after me kind of cracks me up.

The girl next to me on the 2nd place podium stood up to collect awards for a couple of her friends or sisters. She was so excited to be up there.

Overall it was a great day, and I was so excited to get over a 2 minute PR over my June time on the same course. I was also incredibly thankful that my calf felt good and the race didn’t cause any additional issues. Up next is my first olympic distance triathlon this weekend!!

Also, a huge thank you to my friends Matt and Beko for taking all these amazing race photos!!