This weekend I went to my local running store to get a shoe fit for the first time ever.

I know — I should have it a long time ago! For the last three years of running I have been wearing the Brooks Ravenna shoe. Honestly, I think I chose it because it looked cool and I saw some other runners wearing them at races and on blogs. I never had a problem with the shoe, but I always wondered what the recommendation would be. I considered changing last year, but ended up sticking with what I knew. But I decided it was finally time to really find out more about my foot and what should be best for me.

It was so interesting! First my feet were measured. I think the last time I have had that done was when I was maybe 15 years old. HA! Then, I stood for a minute, and walked a little. Just from those two things, the salesman could tell enough about my feet and gait to determine what type of shoe I should use.

I learned a few things from my visit. First, you should size your running shoes up a whole size from your measured length (especially for marathoners!) so you have room for any swelling. For me, this meant that I measured at 7.5, so I should buy an 8.5. In the past, I have worn a size 8.

The salesman could tell that my calves were tight. They actually have been lately, so this was a good reminder that I need to keep working on stretching!

In the end, he determined that the best for me would be a neutral shoe with an insert to support my arch since it flattens when I walk rather than a support shoe. I actually used to wear an insert to support my arch when I was younger, but I stopped wearing them a long time ago. I don’t feel like I have any major foot issues, but I’m interested to see how I like them.

I tried on three different pairs of neutral shoes with the insert. The salesman said from there, my choice really depended on personal feel. They should feel like slippers! First I tried the Saucony Ride 6. Then, the Brooks Ghost 6. I didn’t really like the stiffness of the shoe, and preferred the Ghost. I then tried the New Balance 880v3. This made for a tougher choice. I did some short runs through the store down the street in each shoe, and did a side by side comparison between the Ghost and the 880. 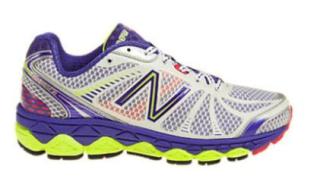 I ended up choosing the Brooks Ghost. 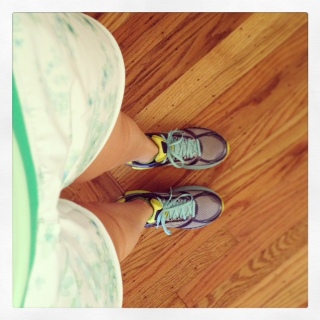 I’ll have to let you know what I think after a few runs in them, but so far I have found them really comfortable just walking around. So, stay tuned for more…

And finally, congratulations to Leslie from Triathlete Treats, who is the winner of my Nuun Hydration giveaway! Send me an email with which 4-pack you would like along with your address.

Don’t forget that you can save 15% off your Nuun order through September with the code hydrateHTC!

When was the last time you got new shoes? How many miles until you usually replace yours? The ones I have been wearing, I got last fall and they have over 400 miles on them! Definitely time for a replacement.

4 thoughts on “Finding the Right Fit”