Last week I last minute signed up for a 10k for Sunday morning — the Capital City Classic. After learning I made it on the Nuun Hood to Coast team, I wanted to have a more up to date 10k time, since the last time I ran one was a year ago. In fact, it was this same race last year!

So, Sunday morning I got up bright and early for the race. The temperatures were going to be warm, and race start wasn’t until 8:00am, so I made sure to wear lightweight clothing. (Check out this post for a few other tips for hot weather running)

We arrived at the start area about 7:15am, and everything seemed very organized. Not too many people were around yet. We still had to pick up our bibs, so I did that right away without any issues. The organization that runs the race (Change of Pace Foundation) had blue and yellow ribbons out you could wear in honor of Boston.

Afterward, I got in the bathroom line.  Good thing I did right away because the lines got crazy long! In fact, they actually pushed back the start time by 5 minutes to help ensure not as many people missed the start. I am sure there were still people in line though when we got going. Next year, I suggest more portapoties than just 20!

{pre-race with my Run for Boston ribbons}

The race had a 5k, 10k and 10 mile options and all 3 races started together. Because of that the beginning of the race was a little crowded, but it didn’t seem to be an issue. The first half of the course was nice and flat, running a small loop along the Sacramento River and into Old Sacramento.

The second half of the course was a little tougher — again still mostly flat, but it had a few sections of gravel, one spot to run between big boulders and some running on a boardwalk. It also had a couple steep but short inclines and declines on those gravel sections. I was nervous running down the gravel! Luckily, no falling occurred! There was also one spot where it was a little unclear which way the 10k and 10 mile runners were supposed to go, but the volunteer helped point it out at the last second.

By the end of the race, I was getting pretty warm, and was working hard to keep up the pace. I was hoping I’d be able to keep pretty close to my pace at the Running of the Elk race — and I did! I’m also excited I was able to get a slight negative split. Not going out too fast is something I have been trying to focus on.

Good enough in this little local race for 2nd place in my age group and 5th overall woman! Sweet!! This is nearly 45 seconds per mile faster for me than this same race last year. I’m so excited by this improvement!

{Ryan and I celebrating our 2nd place age group finishes!}

The 10-miler runners were given finishers medals, but there was also an optional participation medal to purchase if you did the 5k or 10k. Ryan bought one to include on his medal rack, but we also ended up both bringing home Age Group Awards medals too. Change of Pace does a great job on their medals — and this race was no exception. Check them out! 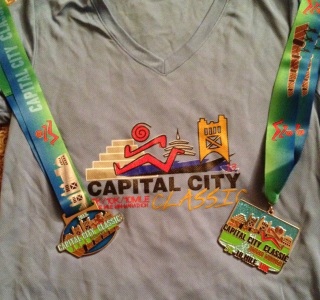 {medals with the women’s tech tee} 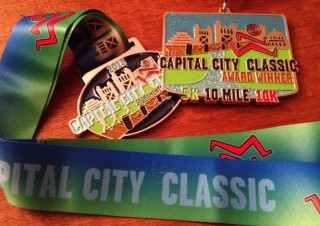 I always think it is fun when a race gives out a good medal — something earned and to be proud of. I have decided every time I run a good race, it just makes me want to sign up and do another one! I’m already looking forward to my next race in May.

There are a lot of races between last weekend and this weekend. Did you race last weekend? What’s next on your race calendar?