Since last week’s race was supposed to be my goal half marathon this spring, I planned to go to the Oakland Half Marathon with a laid-back attitude. I won an entry into this race from PavementRunner‘s giveaway a couple months ago. I was really looking forward to racing in a new location. When I signed up, Ryan decided to race this one as well! As an added bonus, we have friends who live one mile from the race start, so we had a great place to stay, an easy race morning commute, and fans to cheer us on!

The half marathon started at 9:15am — a later start, but it allowed for closer finish times with the marathon (which started at 7:30am). Since the marathon and 5k were already started, the race start area was pretty quiet. The only minor issue we had before the race start was in the bag check — the signs weren’t quite right, so it was a little hard to tell which line to get in. But it worked out ok. 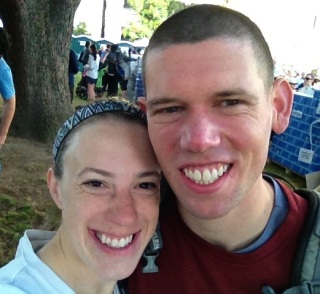 The race started right on time. At the gun, they blew a a huge burst of confetti to run through — it was so fun! The course had a TON of turns, especially in the first 3 miles. This made it hard to run the tangents well since there were so many runners at this point too! 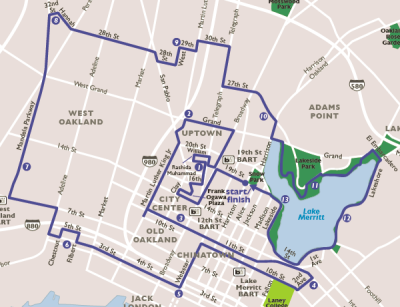 Once I got going, I realized my legs were feeling pretty good, and not too sluggish from the Shamrockin’ Half, so I decided to run a similar pace and see how it went. This race was amazing because there were SO MANY people out cheering at every point along this course!! I think it ranks as one of the most spectated races I have been a part of! I think I had a huge smile on my face for almost all of this race. Check out some of my race photos.

By the last 3 miles, I was definitely getting tired… but the last 3 miles of a half I always feel so close to the finish that it somehow pulls me along. Our friends were out cheering at mile 10, so it was fun to see them! Then, there was a DJ playing some great music with about 0.75 miles left to go that really fired me up to push hard to the finish. The last 0.2 miles are up a small hill (that after running so long makes it feel difficult!), but you could see the finish line right there at the top!

Needless to say, we were excited to celebrate with a post-race beer! This race gave two drinks after the race, but we shared with our friends so they could celebrate with us.

Overall, I thought this was a very well run race. The bands and music along the course were great. The crowd support was amazing. Definitely one to consider doing again in the future. Thanks PavementRunner for the opportunity!