Race day morning is one of my favorite times. There’s a nervous excitement in the air, like a special holiday.

This race morning was a typical one for me. Early alarm went off at 4am, where I stumbled out of bed to get something to eat, then fall back in bed for another hour or two. I do this because it really helps me to not have as many GI sort of issues on race day. I had my typical race day breakfast of a Mojo bar and a banana.

The race started on time. There were two waves to the race — the first wave was runners with a finish time of 2 hours or less plus the relay runners, and the second wave was over 2 hours estimated finish time. I started in the first wave, hoping to finish in just about the 2 hour mark.

Immediately after leaving the starting gates, we ran around the park, and as we rounded the last corner of the park, we noticed the second wave was just starting… something strange was going on. As we merged in with the second wave of runners, we all realized our entire wave must have made a wrong turn!! We ended up running an additional 0.64 miles. Oops!

As one poster on facebook put it “Cowpies Happen“! 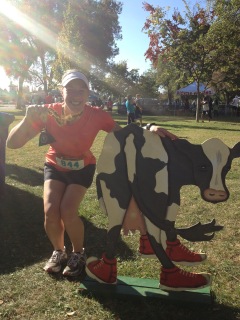 Overall though, it was a beautiful course and an amazing day. I didn’t mind the extra mileage since I’m really just training toward the marathon in December. The course brought us through some of Downtown Sacramento and along the Sacramento River. The volunteers at the water stations were fantastic! 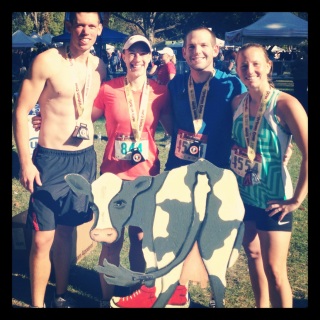 After the race, I found my husband and friends who ran their first half marathon relay, Matt & Raechel. With the extra mileage, Raechel extended her longest distance run by almost a mile, and crushed her pace goals too!!

The race directors ended up adjusting wave 1 runner times based on the long course, and with that update, my time came to 2:00:17 (my watch said my average pace was 9:09/mi for 13.86 miles). I’m pretty excited about this time, compared to my last half. It makes me so much more excited and confident for the marathon! 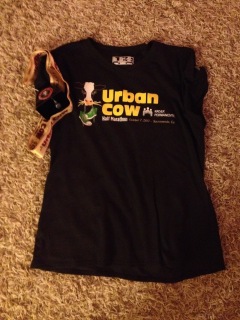