The last few days have been busy since it is the start of the new school year. Yesterday I squeeked in a 3 mile run in the morning at a nice aerobic pace. I was hoping to run today, but it just didn’t happen. Hopefully I’ll get in another shorter run tomorrow morning. Good thing it’s step-back week!

This weekend I’m going away for a department retreat. Should be fun to hang out with a bunch of friends in my department that I don’t get to really see very often. We’re going up to Grizzly Creek Ranch near Lake Tahoe. By the way… I love their logo! So cute, right? 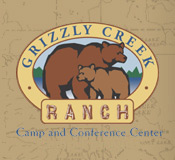 Next weekend is my first Half of the fall season, as a warmup to the RnR LV Marathon — the Urban Cow Half Marathon. I’m getting SUPER excited about it because I’ve actually been doing pretty good with running often since I’m gearing up for the marathon, and because two of our friends will be running the relay. These friends haven’t done too many races yet, so Ry and I have been trying to keep them excited! I’ll talk more about my plans for this race later next week.

Anyone have weekend plans?

Fall race season seems to be coming into full swing around the country — who has races lined up? I’m doing a whole bunch of ’em.  3 half marathons (though a couple I’m planning on using as training runs), and a 20-miler!